In 1859 as a pre-presidential candidate, Abraham Lincoln spoke to the Wisconsin State Fair in Milwaukee and then took a train to Beloit to speak to the Beloit Republican Club. Mr. William Tallman traveled to Beloit and persuaded Mr Lincoln to come to Janesville to speak to this city’s Republican Club. Mr. Tallman transported Mr. Lincoln to Janesville by carriage. After talking to the Republican Club, Mr. Lincoln spent the evening as the guest of the Tallman family.  On Sunday October 2, 1859 Mr. Lincoln joined the Tallman family as they attended worship at First Congregational UCC.

On Sunday, September 27, 2009, First Congregational UCC commemorated this historic sesquicentennial event with a celebratory worship service. This page has been created for those who did not attend that service as well as for those who did attend, but may wish to relive some of that experience. View the order of worship from this service.

Abraham Lincoln, portrayed by Vernon Risty from Arlington Heights, IL participated in the service. He shared how he came to worship at First Congregational. He also shared his Gettysburg Address and his Farewell Speech at the Springfield Train Depot. Mr. Lincoln was joined by his wife Mary, portrayed by Mareya Risty, in sharing a story and some new Lincoln pennies with the children. For more information concerning Vernon Risty, see his web site.

John Eyster, a Lincoln scholar, was the guest preacher. He spoke on the topic of Abraham Lincoln and his religious beliefs. Rev. Eyster is a retired clergyman and retired chairman of the social studies department at Parker High School. He was founder of the Washington Seminar program.

William Tallman, portrayed by Jerry Hahn from Sun Prairie, WI joined the Lincolns in greeting visitors as they arrived for worship and marching in the parade with the 1st Brigade Band to the Tallman House. Jerry is the brother of Marlene Gilmore of our congregation. He has appeared as William Tallman at area reenactments.

A special feature of the service was an appearance of the Civil War 1st Brigade Band who provided all the music for the service. The history of this band goes back to 1864 when they were organized from Brodhead, WI. They marched with General Sherman in Georgia and other engagements near the end of the Civil War.

Today this band is based in Watertown, WI and is comprised of musicians from several states. The Heritage Military Music Foundation is the band’s sponsoring organization. The keystone of the organization is the collection of rare brass, woodwind and percussion instruments restored and in playing condition. They are all antiques.

More than eighty men and women, all volunteers, are involved in the 1st Brigade Band. Widely varied in age and occupation, they are brought together by common interests in music, history, antique instruments and especially, a desire to perform.

You can find more information at the band web site. Listen to a sample of their music as the band performs an 1853 arrangement of the Star Spangled Banner by Allen Dodworth which was the most popular one in use during the Civil War. 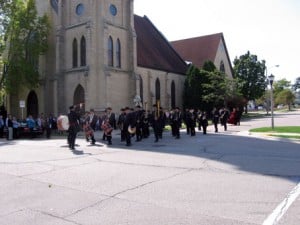 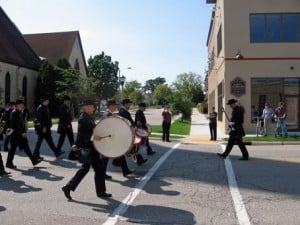