First Congregational Church of Janesville was organized on February 11, 1845, during a meeting of fifteen proposed members held at the Court House. Votes taken at that meeting resulted in a decision to adopt the Confession of Faith of the Presbyterian and Congregational Conference of Wisconsin and a second decision to form into a church of the Congregational denomination.

In these early days Presbyterians and Congregationalists carried on their Home Missionary work in the West through one organization. Each new church was permitted to decide by a majority vote to which body it would belong. That question came before those gathered at the Court House that February day. 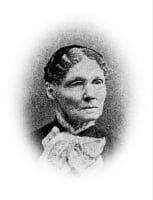 The first vote was a tie. One of the proposed members, Mrs. Eleanor Strunk, had not voted. Tradition has it that she hesitated because of her sensitiveness regarding women taking part in the direction of church matters. She was told “You must vote Mrs. Strunk, your vote is necessary to settle this question”. Mrs. Strunk replied “Very well, if it depends on me, it will be a Congregational church”. To this very day women have been and continue to be actively engaged in the governance and life of our congregation. 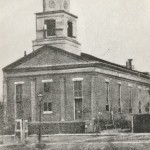 The new church met for a while in the Court House and later at a small red brick school on the east side of Division Street, midway between Milwaukee and Court streets. In 1848 a decision was made to build a church building. A lot was purchased for $150 in March of that year. A red brick building measuring 40 feet by 50 feet was completed on that lot and was dedicated in 1850. By 1851 it was found to be inadequate and was enlarged to 40 feet by 75 feet.

Abraham Lincoln worshiped in this church building with William Tallman and his family on October 2, 1859. A special sesquicentennial celebration worship event was held on September 27, 2009 to commemorate that event.

By 1868 church membership had grown significantly and planning began for a new building. The original church building was torn down and a new church was built at the same location. The new church was dedicated on October 28, 1869.  On May 1, 1875 the church building was gutted by fire. Only the walls were left standing. The church was immediately rebuilt using the old walls and the original plans. The rebuilt church was dedicated on December 19, 1876. Our congregation has worshiped in that building ever since. In 1957 a large education building was added to the church to accommodate substantial growth in the number of children and youth participating in the life of the congregation. 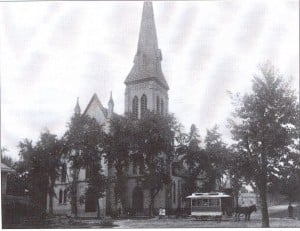 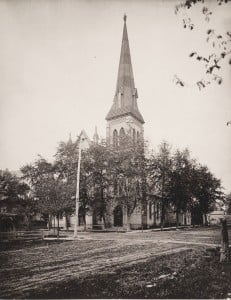 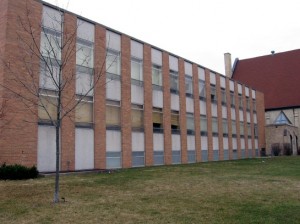 Education building added to church in 1957 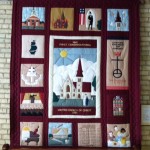 Quilt depicting our history and story

The history and story of our church is graphically depicted in a beautiful quilt made by the quilters of our church for the 1995 celebration of the church’s sesquicentennial year.

Click on the photo to view a larger image of the quilt.

Click here to view a brochure describing the layout of the quilt and explaining the various events depicted on the quilt.